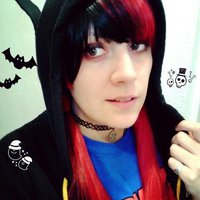 Hello!
My name is Thomas, AKA Gore-Font, I'm a former Californian now Washington based cosplayer.
I do a wide variety of costumes ranging from movies, video games, to anime, television, and comics. I don't have many photos of any of my costumes (camera shy OwO;;), but the ones I do have photos of will be compiled here as a way to track my costumes. I'm active on many social media outlets but the best way to contact me would be via Facebook or Tumblr.
I'm also in school to get my degree for Embalming/Funeral Directing. I'm a 23 year-old transguy living with my parnter (who's in a lot of photos) in Washington.
Hope to have more photos for you soon!