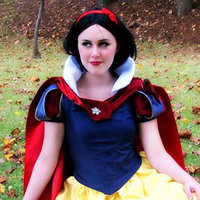 I'm an Atlanta-based costume maker who loooves to cosplay at every opportunity! I'm also the real life Lydia from Skyrim ;) I've been sewing and making costumes since I was a kid, but I started officially cosplaying in 2009. I've branded myself as a costumer that likes to cosplay, because I don't JUST cosplay. Sometimes I make stuff that wouldn't be considered cosplay (though its a hazy term and I myself still don't get it 100%), and I've also been making costumes for myself since I was very young. Fun fact: My first self-made costume ever was a MY LITTLE PONY in kindergarten! (Ironic right? I was doing the popular cosplay before it was popular :-P). Ever since then I've gotten all excited about every opportunity to wear a costume for Halloween, parties, ceremonies, etc., whether it was all constructed by hand or thrown together with closet stuff.

Anyway, I started really getting into cosplay by 2012, and now I attend about 4-6 conventions a year. I made a whopping 15 costumes in 2013! (Up from 1-2 per year! :-P). I'm a serial hobbyist, always starting something then moving on to something else. But I've decided that this is going to be my official crazy hobby for a loooong time. I'm going all in! @_@