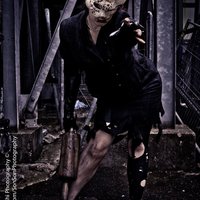 I only got into cosplaying at MCM May 2013 and that was purely by accident! I was meeting some people there from the 501st Legion to discuss making an ANH: Stunt Stormtrooper to join their ranks and was just wowed at all the cosplay I saw! I went as a Fem Han Solo for fun and decided I needed to take it further!

My cosplay that came next was San from Princess Mononoke in October 2013, I got some of the costume made for me (dress/overdress/bands) and it was a nightmare. The person who made it for me did a horrible job and overcharged a lot. So I had to take apart one of my favourite dresses, quickly remake the bands for the first con I wore it to as I only had a week to go! (If you see a shiny dress in the early San pictures for that cosplay, that's why!). I remade the dress for MCM myself and got a lot of great feedback. Now I refuse to let anyone make my costumes for me as a result of that bad experience unless I know them, and even then I would prefer they help me and teach me the skills rather than do it for me.

I've become quite addicted to Worbla and making armour, so I anticipate making many large scale projects from now on. Especially as I'm a huge Blizzard fan and play World of Warcraft and Diablo and am in love with all their character designs. I think I'm set for life for projects now!

My favourite genres are fantasy and sci-fi. I was brought up with a love for the 80s fantasy films and Star Wars so the majority of my cosplay projects will be centered around my love for films and games with these themes.