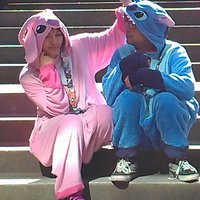 I've been cosplaying since Kumoricon 2009. My first two costumes were "frankensteined" from things I got from GoodWill. The year after that, I bought my costumes offline and had to alter a few things. The only one I have actually made from scratch is my toddler Kairi, and another that was partially made by my friend Xander's mom (KH 1 kairi). I made my keyblade for Kairi from scratch, and all of my wigs (at least most of them) were styled by me.
I love cosplaying mostly because I get to be my favorite characters, but I also enjoy being around other cosplayers while I'm in costume. I mostly go to conventions because I want to go in a costume and host panels, so if I don't wear a costume to a convention I feel "naked" or "out of place", but sometimes money can really hurt a cosplayer. T__T